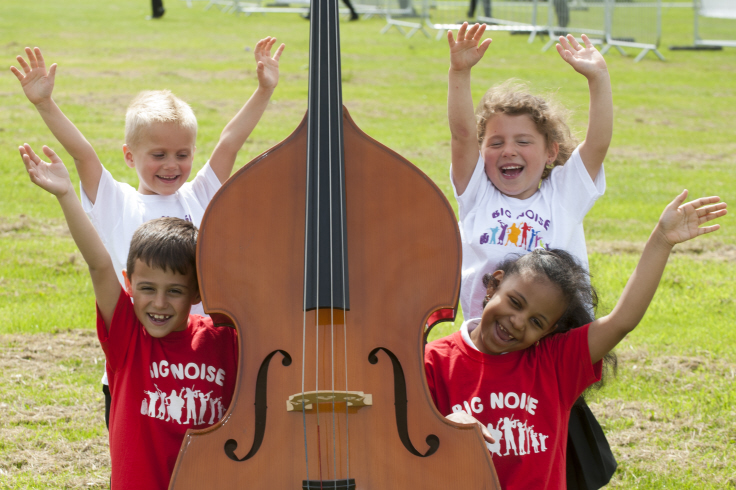 A new orchestra that aims to transform children’s lives made its performing debut in Aberdeen today (Monday).

Torry is the third community in Scotland to establish a Big Noise orchestra – inspired by Venezuela’s “El Sistema” movement.

Over 200 Primary 1 and Primary 2 children from Walker Road Primary and Tullos Primary sang and played in a marquee on playing fields at Girdleness Road. Family members of the children were joined by Aberdeen’s Lord Provost, a Scottish Government Minister and a representative of the Venezuelan embassy to applaud the performance.

Big Noise Torry is delivered in partnership between Aberdeen City Council and the charity Sistema Scotland.

Aberdeen’s Lord Provost George Adam said: “It is enormously exciting to see the children on stage today. This is the beginning of something very special, for these children and the wider Torry community.

“This is truly a fantastic opportunity for Torry and I would encourage everyone in the community to get involved.”

Minister for Public Health, Maureen Watt MSP said: “I’m delighted to be here today for the launch of Big Noise Torry. The Scottish Government is committed to investing in programmes like this that support young people, tackle inequality and empower communities.

“A recent evaluation by Glasgow Centre for Population Health showed how Sistema Scotland is helping to transform the health, wellbeing and prospects of the children who take part in Big Noise orchestras in Govanhill and Raploch – now Big Noise Torry will reap the benefits.

“As well as increasing the confidence, aspirations and self-esteem in our children and young people, Big Noise also brings together the community, and I’m really pleased to be meeting the next group getting involved here in Torry.”

Sistema Scotland chairman Richard Holloway said: “From now on, every child growing up in Torry can have this orchestra in their lives. They will start as babies and by age six they will be given their own instrument with a pathway to learn together immersively right through to adulthood. On the surface we will notice music – much of it wonderful. On closer inspection we will see much more going on – as a new generation gains the resilience and confidence to reach their full potential across all areas of their lives. This new generation brought up in the orchestra is going to lead their community to an even better future.”

Aberdeen City Council’s Convener of Education and Children’s Services Councillor Angela Taylor said: “We are thrilled to be able to bring Big Noise to Torry. The programme represents a great investment in the future of the community by the City Council. By working in partnership with Sistema Scotland we have a real opportunity to give life-enhancing and life-changing experiences to the young children of Torry and their families.

“Evidence from Sistema Scotland’s work in other communities shows how involvement in music-making is hugely beneficial to participants educationally and socially, as well as improving their general wellbeing. Big Noise Torry represents a great investment in the future of the community and I hope everyone in the area can be part of this fabulous experience.”

Big Noise Torry will run a summer school at Torry Academy, open to those about to enter P3. When the new school year begins P3 children will be invited to attend after-school sessions at Torry Academy. P1 and P2 children will be taught as part of the daytime school curriculum. There will also be nursery and baby sessions. The orchestra will grow through Primary School and beyond with the generation who performed at the launch concert today.