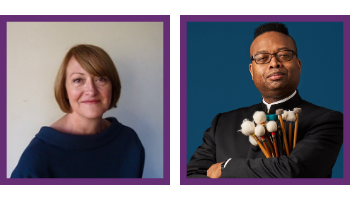 We are delighted to welcome Catherine Muirden and Paul Philbert as newly-appointed Board Members of Sistema Scotland.

Catherine Muirden is a People Director who specialises in Business Change. After graduating from Edinburgh University, her management career began at Marks and Spencer, where she held senior HR positions including Group Head of Recruitment. After 6 years as Human Resources Director in the Retail Bank at Barclays, in 2014 she was brought into the Co-operative Group as a leader in the turnaround of the Food business, where she was People Director until her retirement in December 2019. She maintains a keen interest in youth employability, leadership development, and culture change in business.

Catherine is a current board member of Scottish Ballet, a Trustee of the National Galleries of Scotland, a former Chair of The Fruitmarket Gallery in Edinburgh and former non-executive director of the Crieff Hydro Group of Hotels.

“I was lucky enough to be introduced to music at a very early age, and I understand its power to inspire and develop young people. I’m very proud and excited to be appointed to the board of Sistema Scotland and to bring some of the skills I learned later in life to this amazing organisation.” Catherine Muirden

Born in London, Paul Philbert displayed his musical propensity early in life, studying at the Purcell School of Music, and further, at Trinity College of Music. He then established himself on the professional stage as the founding Principal Timpanist of the Malaysian Philharmonic Orchestra in 1998. Paul has appeared as a guest performer with many renowned ensembles in the UK and Asia, including the Orchestra of the Royal Opera House, the Philharmonia, BBC Symphony, the Hallé, Qatar Philharmonic and Seoul Philharmonic, to name but a few.

“I couldn’t be happier to be joining the Board of such an important and visionary organisation. In my opinion, access to music, and opportunities for artistic expression, are a vital part of an holistic education.  Sistema Scotland’s extensive achievements and their further ambitions are nothing but inspiring to me, and I am entirely committed to doing all that I can to support this truly magnificent institution, now, and in the years to come.” Paul Philbert