Sistema Scotland, the Scottish charity that works to transform children's lives through music, has announced the appointment of Peter Nicholson as their new Director of Music. Peter will assume responsibilities on 12th November and will succeed Francis Cummings, who left to begin a role as Head of Junior Conservatoire (Music) at Royal Conservatoire of Scotland.

Peter Nicholson has been an integral part of the Sistema Scotland team since 2009, when he first joined the organisation as a Musician. After thriving in the post for four years, Peter went on to assume the position of Senior Musician, before also undertaking the role of temporary Team Leader at Big Noise Raploch. Within his new role as Director of Music, Peter will be responsible for leading on the musical and educational vision, advocacy, curriculum development and programming at Sistema Scotland. 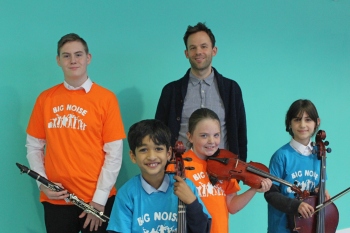 Peter is a graduate of the University of York (BA Hons) and the Royal Scottish Academy of Music and Drama (MMus). He is a passionate educator with a committed belief in the potential for music and the arts to positively impact the lives of individuals and communities. He has extensive experience as a teacher and workshop leader in both local authority, higher education and third sector contexts. As a freelance cellist he has worked with a range of professional symphony orchestras and ensembles alongside establishing a reputation for working across genres and styles as both composer and performer. Peter is a member of the Glasgow Improvisers Orchestra and The One Ensemble.

Peter Nicholson said: "I am absolutely thrilled to be appointed as Director of Music at Sistema Scotland. Since joining Big Noise Raploch nine years ago, I have developed huge admiration for the communities we serve and for the staff and young people who populate the Big Noise centres. To be able to help steer the future musical direction of an organisation I know and love is a massive honour and an exciting challenge that I can't wait to begin."

On Peter's appointment, Nicola Killean, Chief Executive of Sistema Scotland said: "We are delighted to have appointed Peter Nicholson as the new Director of Music. Peter has been a true asset to the organisation since he joined us back in 2009, and I am positive he has the passion, experience and ambition we need to embark upon our next ten years of making a Big Noise in communities across Scotland"

Sistema Scotland is a registered Scottish charity that works to transform the lives of children and communities through music. More than 2,500 children now attend Sistema Scotland's Big Noise programme across Scotland every week. Big Noise uses the symphony orchestra and learning a musical instrument, via an immersive and intensive programme, as the tools to equip children with a wide range of social and life skills including confidence, resilience and aspiration.