Big Noise Raploch made their Edinburgh International Festival debut on Sunday 4 August, when our patron and internationally-renowned conductor Gustavo Dudamel led a rousing open rehearsal at the Usher Hall. Big Noise played alongside their counterparts from YOLA (Youth Orchestra Los Angeles) and YOLA National Institute (featuring students from diverse regions across the U.S.). 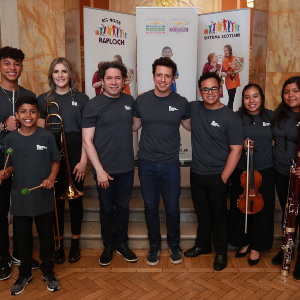 Dudamel's commitment to using music to help children and young people in disadvantaged communities is well-known. A graduate of the original El Sistema programme in Venezuela, the Music and Artistic Director of the Los Angeles Philharmonic established YOLA in 2007, inspired by his own experience. Both YOLA and Sistema Scotland work in communities facing a range of complex, long-term challenges, using an intensive, immersive approach to learning and performing in an orchestra to help children and young people reach their full potential as they grow into adulthood. 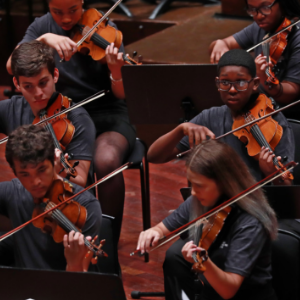 Dudamel has conducted the young musicians of Big Noise Raploch twice before; in a huge open-air concert in Raploch in 2012 (part of the official launch of the London Olympics) and when the children visited Caracas in 2014.

The event at the Usher Hall opened with a performance of the traditional piece 'A Scottish Celebration' (led by LA Phil's Associate Conductor, Paolo Bortolameolli, who has worked extensively with the group), before Dudamel led the open rehearsal of Bizet's Carmen Suite No.1 and Brahms' Hungarian Dance No. 5. 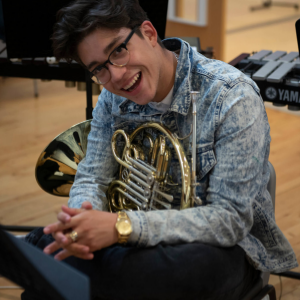 The open rehearsal was the grand finale of a short residency, where young musicians from YOLA and YOLA National Institute have spent part of the past week getting to know, rehearsing alongside and forging friendships with their peers at Big Noise Raploch. The Raploch Residency has focused not only music and performance, but also included a range of activities from sports (introducing the U.S. visitors to the delights of rounders!) to a ceilidh at the Engine Shed in Stirling and a community barbeque in the heart of Raploch. 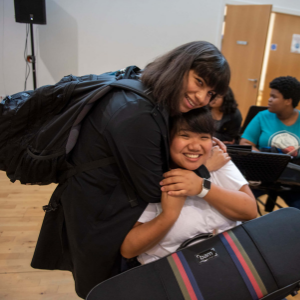 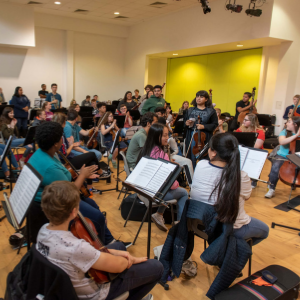 We'd like to extend a huge thank you to Paolo Bortolameolli, for working so hard with the children and young people of Big Noise Raploch and YOLA during the Raploch Residency. Also to the wonderful team from the LA Phil who were with us for all (or part) of that residency, particularly Elsje Kibler-Vermaas, Phil Bravo, Angelica Cortez, Cynthia Fuentes and Sophie Jeffries.

It's been an amazing experience that will stay with us for many years to come!